In the initial period until the progress inspection report is submitted, i.e. not later than 25 days after the Executive Council approves the inspection, the inspection team can apply the following techniques:

The equipment to be used is listed in the inspection mandate and may include satellite- based positioning devices, such as GPS, and surveying equipment. When carrying out position finding activities, the inspection team will use some reference system based either on a geographical projection (using latitude and longitude projection) or a grid. Position finding may also include the mapping of landmarks or man-made changes on the surface, in order to help with the general orientation in the inspection area.

There are strict procedures for securing photographic evidence and records. Both the inspection team and the inspected State Party are responsible for meeting these requirements. All related information, such as date, time, location and subject of each photograph or video recording, needs to be recorded in logs.  Any further handling of images, including their processing and examination, is also strictly regulated.

In case additional overflights are agreed upon, the inspection team can proceed to perform multi-spectral imaging including infrared measurements and gamma spectroscopy.

This technology measures light at wavelengths around the spectra of visible light. The resulting images are then combined and may provide additional information about changes in surface, near-surface and sub-surface features.

The inspection team collects environmental samples, such as soil, vegetation and water, for later analysis in a specialized laboratory. Air sampling to detect radioactive particulates and radioactive gases is very important. This is not only restricted to the surface air, but also extends to shallow underground layers in order to sample gases that may have been trapped in the upper layers of the soil. This sampling has to be done as soon as possible to ensure that elements with a short half-life can still be detected.

Preferably, all sample analysis is performed in an on-site inspection field laboratory at the base of operations. When necessary, because equipment for some analysis activities is not available in the field, samples may be sent to laboratories that have been designated prior to the inspection.

In some cases, the presence of radionuclides relevant for an on-site inspection can be identified immediately in-situ using a portable instrument.  The use of mobile equipment gives the inspectors more flexibility in the field, and measurements can be taken immediately and at several locations.

As with photographic material, the inspection team must be meticulous when recording its findings and storing samples. As with other procedures, representatives of the inspected State Party can be present during all inspection activities and have the right to receive copies of all data collected in the inspection area and retain portions of the samples.

This technology is used preferably in the beginning of an on-site inspection as the number of seismic aftershocks after a nuclear explosion decreases rapidly. An underground nuclear explosion would create a cavity and changes in the geological surroundings. Following a nuclear explosion, geological structures at the site of the explosion will settle, causing minute seismic events with distinct seismic signatures that can be detected by what is called passive seismological monitoring.

Seismic field equipment is placed at several locations throughout the inspection area, creating a seismic network. The network is comprised of approximately 40 mini-arrays, each consisting of four seismometers and one digitizer.  For a rapid analysis of the incoming seismic data, an on-site inspection will have a seismological centre at the base of operations.

The inspection team has also the right to conduct an initial overflight of the inspection area as soon as possible, to help the team get oriented in the area. It helps to narrow down the number of locations on the ground that need further inspection and to facilitate the collection of factual evidence. The initial overflight is limited to a maximum of 12 hours. The Treaty identifies the equipment that can be used during the initial overflight, including field glasses, passive location-finding equipment (e.g. maps and theodolites), video cameras and hand-held digital photo cameras.

Additional overflights can only be conducted with the inspected State Party’s approval. The inspected State Party has the right to impose restrictions on the parameters of an overflight, such as altitude, in-flight procedures like circling and hovering, the number of inspectors on board or the type of measurements and observations. Subject to approval by the State Party, the inspection team may perform different activities during the additional overflights, including multi-spectral imaging, gamma spectroscopy and magnetic field mapping.

Used during additional overflights, gamma spectroscopy helps identify gamma radiation-emitting substances by measuring their energy and intensity. Elevated radiation can be caused by geological phenomena but also by man-made activities, and may thus point to a possible nuclear explosion.

The use of geophysical techniques is meant to detect, from the surface, changes in the geological structures, and may reveal relevant findings.  These techniques include:

Magnetic field mapping measures anomalies in the Earth’s magnetic fields that can be caused by different iron-containing objects in the ground.  The presence of such objects can point to infrastructure elements of an underground nuclear explosion, such as pipes and cables. Magnetometers can also help identify man-made structures in the ground, such as foundations or shafts.

Gravitational field mapping looks for microgravity changes in Earth’s gravitational field  and can potentially help locate the cavity created by an underground nuclear explosion, tunel entracies and/or other voids. A cavity, or a void, represents a change in the density of the rock compared within surrounding rocks. The size of the cavity depends on various factors, such as the yield of the explosion, the depth and the surrounding geology. Depending on the rock type, a one kiloton explosion at a depth of 200 metres could cause a cavity of approximately 17 metres in diameter.

Ground penetrating radar uses electromagnetic waves to locate objects in the shallow underground by reflecting off them. The reflected waves then allow for the identification of these objects and their location. Higher frequencies correspond to shorter waves, and the shorter the wave, the smaller the buried objects that can be detected. This technology is used to identify parts of an underground explosion infrastructure.

Active seismic surveys are used to search for and locate underground anomalies, including cavities and rubble zones, to detect and characterize the observables identified, and to interpret what the presence of those observables means. The primary targets for an active seismic survey are the cavity and possible associated fracture and rubble zones, including their characteristics, created by a UNE.

Resonance is an important physical phenomenon that can be defined in a very general way as the increase in the amplitude of oscillation in a system exposed to a specific force with frequency equal or very close to the natural frequency of the system. Resonance seismometry techniques include both active and passive methods to search for and locate underground anomalies, including cavities and rubble zones; to detect and characterize the observables identified; and to interpret what the presence of those observables means in the light of other OSI techniques.  The technique relies on the seismic signals produced by underground features that resonate when seismic energy from other sources, either natural or man-made, passes through them or on changes in the velocity of propagation or signal attenuation by such underground features.

Drilling is the final technique employed to ascertain whether a nuclear explosion has taken place.  Typically, this technique is applied when other techniques have located a potential explosion cavity that needs to be examined for its nuclear nature.

As drilling is about obtaining radioactive samples from the site of the actual explosion, and therefore carries potentially great health risks, the procedure to allow the use of this technique is rather complex.

Strict health and safety precautions must be observed, since it has to be assumed that solid or molten material extracted from the actual location of an explosion or its vicinity is highly radioactive.  The samples obtained are then sent for further analysis. 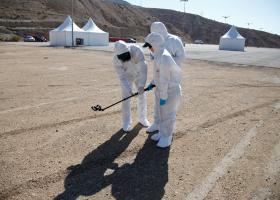 An on-site inspection will follow a series of clearly defined steps and timelines set out in the Comprehensive Nuclear-Test-Ban Treaty (CTBT) and implemented by the CTBTO in its permanent form after entry into force.

An on-site inspection will follow a series of clearly defined steps and timelines set out in the Comprehensive Nuclear-Test-Ban Treaty (CTBT) and implemented by the CTBTO in its permanent form after entry into force.